Reporting the Latest News in North Central PA – Listen to the Podcast! 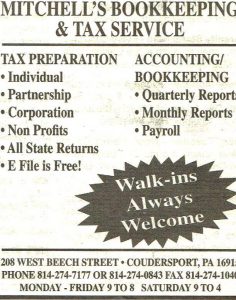 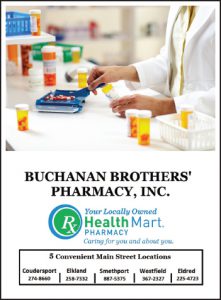 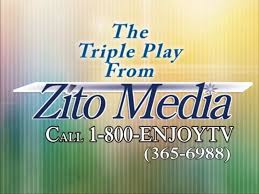 For a complete list of upcoming events, go to our Calendar of events and activities in North Central PA page 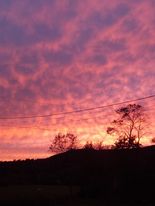 A Shinglehouse teenager was killed in a one-vehicle crash early Monday morning in Corydon Township and his passenger was seriously injured. According to state police, 18 year old Donovan Smith was speeding on a forestry road when his Dodge Stratus went over an embankment, became airborne, rolled onto the passenger side and struck a tree with its roof. The car rotated around the tree and landed back on its wheels. Both Smith and his passenger, Dakota Baker, also 18 of Bradford were trapped inside the wreckage. Smith was pronounced dead at Bradford Regional Medical Center. Baker was flown to Hamot Medical Center in Erie for treatment of serious injuries.

State police at Mansfield have just released details about a three-vehicle collision occurring last Tuesday afternoon in Richmond Township. Troopers explained the pile-up occurred when Joshua Allen of Liberty tried to make a left turn onto South Main Street and his  2019 Subaru Impreza hit a 2013 Hyundai Elantra driven by a 17 year old Mainesburg, PA boy. Allen’s car then traveled into the opposite lane and collided with a 2019 Nissan Murano driven by Sara Roupp of Mansfield. All three drivers escaped injury. Allen was arrested for careless driving.

A 17 year old Osceola girl has been arrested for transmitting sexual images over social media last Friday morning. State police at Mansfield have filed charges against the teen in district court.

Legislation sponsored by Rep. Aaron Bernstine (R-Beaver/Butler/Lawrence) that would focus on the parole process for violent offenders was vetoed Monday by Gov. Tom Wolf.

House Bill 146, or Markie’s Law, was named after Markie Mason, an 8-year-old boy who was brutally stabbed to death by a man who was paroled at the end of his minimum sentence for homicide, even after being convicted of committing two separate assaults of other inmates while in prison.

The bill would postpone consideration of a violent inmate’s parole an additional 24 months following the inmate’s minimum release date for each conviction of a violent offense while incarcerated. In addition, it would suspend consideration of an inmate’s parole an additional 12 months if the inmate attempts to escape, smuggles contraband, or retaliates or intimidates witnesses while incarcerated.

In his veto message, the governor called the legislation “misguided and does not promote public safety.”

Bernstine disagrees with Wolf. “Had this animal who murdered Markie Mason remained behind bars, he would still be alive today. How does this bill not promote public safety? The legislation is all about keeping criminals locked up so they can’t be harmful to society.”

Markie’s Law passed the Senate by a 41-9 vote and then the House voted 133-69 to concur with changes made by the Senate to the original bill.

Bernstine said he will continue his fight to protect the public from violent offenders.

The Department of Conservation and Natural Resources (DCNR) announces the department has developed guidance for landowners, developers, planners, and local officials who are considering building grid-scale solar installations. A grid-scale solar facility is one which generates power from the sun and feeds it into the power grid, supplying a utility with energy.

The recommendations in the document outline 10 considerations for siting best practices and eight for sustainable design. They include:

Avoid and minimize erosion and sedimentation;

Actively protect and restore wildlife habitat to include and support native species; and

Include decommissioning that restores the land to the same condition as it was before.

Grid-scale solar installations are not permitted on DCNR lands, nor on lands that have received DCNR grant funds.

The guidance document is intended to help landowners, municipal officials, developers, investors, and planners make informed decisions regarding the siting and development of grid-scale solar.

Using the clean energy from the sun, the department is deploying small-scale solar arrays to take certain buildings and facilities off the grid, saving money and reducing DCNR’s carbon footprint.

Throughout state parks and forests, there currently are 23 solar array installations.

By 2030, DCNR will derive all of its electric from renewables, about half of that through solar installations.

Learn more about the department’s sustainable practices on the DCNR website.