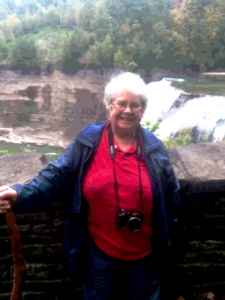 Gerri Miller, Editor and owner of Black Forest Broadcasting, started out in journalism at an early age. She published the “Girl Scout Gazette” Sunday nights on her homemade hecktograph. As a teenager, she worked summers for THE POTTER COUNTY JOURNAL. She graduated from Charles Morris Price School of Advertising and Journalism in Philadelphia. Following graduation, she worked as a Marketing Manager for trade magazines published by Chilton Company. After returning home to her native Potter County, she published a regional magazine TOWN & COUNTRY JOURNAL for several years. After that, she was co-owner of Creative Communications, an advertising/public relations firm in Coudersport. At various times, she worked as a “stringer” for THE BRADFORD ERA and OLEAN TIMES HERALD. In 1979, she was hired as the News Director at radio Station WFRM, a position she held, along with several others concurrently at the station until 2008 when she left to start Black Forest Broadcasting an internet radio station/website which is updated every weekday to serve the counties of Potter, McKean, Elk, Cameron and Tioga in northern Pennsylvania.