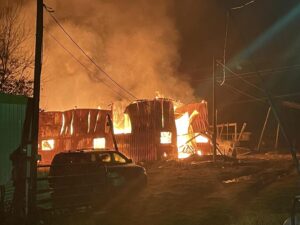 Several area fire fighters battled a barn fire early Wednesday morning on Coleman Mills Road in Roulette Township. Roulette firefighters were summoned at 5:00 am and found the barn fully involved.  They  were joined by Coudersport and Port Allegany a few minutes later. The blaze was brought under control about an hour later and all units were back in service by 9:00 am. There were no injuries at the scene although multiple heads of livestock (Pigs, Sheep, Goats) perished. The uninsured  barn was a total loss and flames spread to an adjacent chicken coop, but that structure was saved. The barn was owned by Reuben and Melissa Redmond. Due to the extent of damage, the state police fire marshal was unable to determine the cause.

business between July 25 and August 5. State police report thieves gained access to the checking account of Northpoint Contracting and made online purchases totaling $11,1136.32.

A 63 year old Emporium woman was cited by state police  for physical harassment. Troopers did not release the name of the suspect but say the suspect caused a disturbance on Nickler Road in Shippen Township at around 4:00 am September 22.

State police at Emporium arrested a 44 year old Butler, PA man for DUI after being tipped off by a witness. The suspect, whose name was withheld was taken into custody at 1154 Bennetts Creek Road in Gibson Township on the night of September 2 while driving a 2019 Dodge Ram pickup.

A criminal mischief in Ridgway Township is being investigated by state police and the game commission. Vandals fired three rounds at a residence at 6033 Grant Road during the early morning of September 10. The house is owned by Steven Stark. Damage is estimated to be $500 and anyone with information is asked to call state police at 814-776-6136.

The House State Government Committee announced on Tuesday that a vote has been scheduled for Oct. 26 on House Bill 1369, which would open Pennsylvania primary elections to independent voters. The vote follows a hearing hosted by Rep. Chris Quinn (R-Delaware), who is the prime sponsor of the bill. The hearing, held 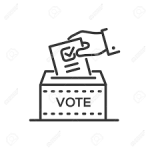 at Villanova University in August, debated the merits of allowing independent voters to vote in Pennsylvania primaries. Current state law only allows registered Republicans or Democrats to vote in primary elections.

If House Bill 1369 passes the State Government Committee, it would then go to the full House for consideration.