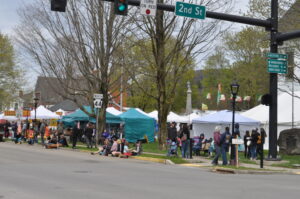 After a soaking rain Friday, the weatherman relented and provided a mostly sunny day Saturday for the annual Potter-Tioga Maple Festival

Reported assaults of two Smethport  children are being probed by state police at Lewis Run. The victims are listed as a 6 year old girl and a 5 year old girl. One of the assaults allegedly took place in Keating Township last Monday afternoon and the other in Liberty Township April 1.

State police at Lewis Run are charging a 33 year old Allegany, NY man with drug possession. Troopers allege when they pulled over Adam Petersen’s 2018 Ford Escape on Clarence Street in Bradford early Thursday morning they found him in possession of illegal drugs and drug paraphernalia.

under the influence of a controlled substance.

State police at Mansfield arrested 33 year old Darren Covert of Montour Falls, NY for drug possession after they were dispatched to 1368 Johnson Hill Road in Covington Township on the afternoon of April 6 on a Mental Health Warrant. Covert was allegedly found with drug paraphernalia on his person.

Both people involved in a domestic violence incident in Tioga County early Saturday have been arrested for physical harassment. State police allege a 37 year old woman and a 52 year old man assaulted each other at their home on Canoe Camp Creek in Covington.

A ChildLine Allegation of medical neglect of a child is being probed by troopers at Mansfield. The victim is listed as  two year old Knoxville girl and the alleged neglect took place between March 13, 2017 and March 14 2022.

In an effort to protect wildlife habitat, the Pennsylvania Game Commission plans to spray more than 62,000 acres of state game lands this spring. Spraying will occur on 27 different state game lands – 62,934 acres in all – and will begin as soon as leaf-out occurs and spongy moth egg masses hatch, likely later this month.Spongy moths previously were known by the common name gypsy moth, but the Entomological Society of America changed the name in March. More information on spongy moths and the Game Commission’s spraying program, including a map updating the status of this year’s spraying, is available on an interactive web page at www.pgc.pa.gov.

Most of the blocks of forest to be sprayed on game lands can be treated within one day, often within only a few hours. The insecticide to be used is Mimic 2LV. Its active ingredient is tebufenozide.

This agent generally is considered safe to humans. Most negative side effects happen with repeated, long-term exposure to high concentrations of the product. As with any chemical, it may cause eye or skin irritation if exposed, and it is recommended to wash any affected area if irritation occurs.

The forests to be treated in the coming weeks have building populations of spongy moths that, if left untreated, could cause severe defoliation this summer.

This year’s spraying will occur in the following regions: Southcentral, 4,087 acres; Northcentral, 44,635 acres, Northwest, 11,287 acres, and Northeast, 2,926 acres. Spraying occurred in the Southwest Region last year, and the population there seems to be in decline so no spraying is scheduled there. The Southeast Region, which showed little to no spongy-moth population build-up, likewise is not slated for spraying at this time.

Previous spongy-moth impacts unfortunately led forests on state game lands to transition from mast-producing mixed-oak stands to stands dominated by birch and maple, which are not nearly as beneficial to wildlife.

The Game Commission says oaks are the main target of spongy moths, and they also provide the best and most reliable foods for wildlife. The  loss of acorn availability across such a potentially large area can have extremely detrimental impacts on wildlife populations, ranging from chipmunks and squirrels all the way up to deer and bears. Even if the oak trees manage to survive damage caused by this defoliation, the reduction of acorn production can linger for years after.

This year, due to the expansion of spongy moths across the state and the increased need for spraying across multiple lands, the Game Commission will conduct its own spraying program and has allocated over $1,236,000 from its Pittman-Robertson Federal Wildlife Grant funding to cover the costs of the effort.

Biologists say everything from squirrels to bears to turkeys will have populations fluctuate based on acorn crops. Bears depend on fall mast like acorns to build up important fat reserves for the winter months. Deer survival and reproduction can improve during years with good acorn crops. Neo-tropical birds, such as cerulean warblers, occupy habitats dominated by oaks. Wild turkey and ruffed grouse populations also benefit from acorns.”

The PA Department of Health has not updated data since May 4. Therefore, the number of Covid 19 deaths remains the same as it did on that day. There3have been 44,733  Covid 19 deaths in the state to date. Deaths  in the Black Forest Broadcasting Service area  to date are holding steady.