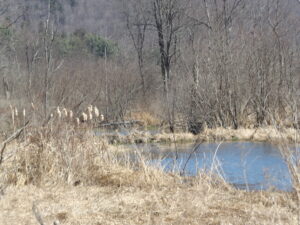 Mansfield state police have arrested 63 year old Michael Gilbert  of Tioga for marking terroristic threats to a 61 year old Tioga man on the evening of April 5 on Hillview Lane in Lawrence Township. Troopers claim Gilbert had a loaded handgun on school property and is prohibited from possessing a gun. Charges are being filed in district court.

Troopers at Mansfield did not release the name of a 28 year old Blossburg fisherman  who refused to leave the property of a 38 year old Mansfield woman on Pitts Road in Richmond Township when repeatedly asked to do so. However, the suspect did leave  moments before state police arrived.

A Ulysses woman is being charged with speeding for a one-vehicle crash Monday evening on the Fox Hill Road in Ulysses. State police said Jennifer Proctor lost control of her 2005 Chevrolet Trail Blazer went off the right side of the road on a left curve hit a fence and rolled down an embankment before stopping. Proctor and two children ages 4 and 10 were not hurt.

DUI charges are being filed against a 30 year old Ridley Park man whose 2007 Subaru Forester was pulled over by troopers on East Second Street in Ulysses Township Friday afternoon. The suspect, whose name was not revealed, allegedly was found in possession of driving under the influence of drugs.

State police at Lewis Run have charged 33 year old Matthew Orris of Duke Center with physical harassment for an assault allegedly taking place Saturday night on Main Street in Otto Township McKean County. Troopers claim Orris assaulted 61 year old William Shick of Duke Center and damaged a wooden chair and kitchen cabinet during the episode. Damage to the furniture is estimated to be $200.

The Pennsylvania Department of Agriculture  has confirmed the state’s first positive case of Highly Pathogenic Avian Influenza (HPAI) in domestic poultry, in a flock of commercial layer chickens on a Lancaster County poultry farm. A state and federal interagency task force is prepared and initiating a response plan.

While there is no risk to the public, and poultry and eggs are safe to eat if cooked properly, HPAI is highly infectious and can be fatal to domestic birds (chickens, ducks, geese, quail, pheasants, guinea fowl and turkeys). According to the U.S. Centers for Disease Control and Prevention, avian influenza detections do not present an immediate public health concern. No human cases of avian influenza viruses have been detected in the United States.

The PA Department of Health reports, there have been 44,539 Covid 19 deaths in the state to date. (+51).Deaths  in the Black Forest Broadcasting Service area  to date are mostly  holding steady.