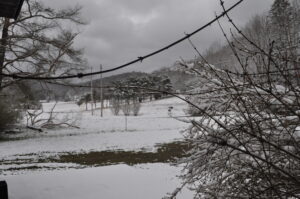 The snowstorm arriving in the area Monday afternoon resulted in a number of accidents, some with injuries. However, details about many were not available at news time.

A 31 year old Galeton man has been arrested for  criminal mischief by state police at Coudersport. Troopers claim William Oliver punched the driver side mirror on a Dodge truck owned by Richard Mack of Wellsboro and subsequently broke the plastic housing on the mirror Friday night while it was parked on the Germania Road in Abbott Township.

DUI charges are pending against an unnamed 28 year old Kersey man following a fiery one-vehicle crash early Saturday morning in Fox Township. State police said when they responded to a one-vehicle crash on the Toby Road they found the suspect had been driving his 2018 Subaru Impreza under the influence of alcohol and was taken to Penn Highlands Elk for a blood draw.

Pennsylvania’s Primary Election is less than a month away and PennDot is reminding candidates for political office that no campaign signs can be placed within the PennDOT right-of-way along state road, interstate, expressway, and other limited access highways.  Political signs cannot be attached on light or signal posts, guide rail or other PennDOT traffic control devices. It is illegal to install, erect or place any sign of any nature, including a temporary sign, on PennDOT right-of-way. Illegal signs can be removed at any time by PennDOT.

Campaign signs placed along roadways may pose the following risks:

Possible harm to animals (wire posts could cut animals, and the plastic signs could be mistakenly eaten by animals);

Plastic signs that blow off their posts could clog drains; and

Signs posted in the right-of-way will be removed and stored at the PennDOT county maintenance office for 30 days prior to disposal.

The PA Department of Health reports, there have been 44,488 (+24) Covid 19 deaths in the state to date. Deaths  in the Black Forest Broadcasting Service area  to date are mostly  holding steady.