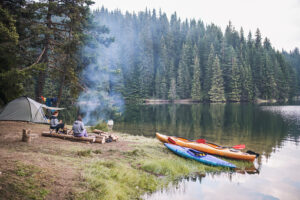 Injuries for second driver in DUI collision….Troopers at Mansfield investigate two more over doses….Ridgway driver arrested for DUI and speeding…..DCNR invites anglers to camp out at State Parks….

Injuries were reported following a DUI related collision early last Friday morning in Liberty Township, Tioga County. Troopers report the collision occurred when a 2013 Dodge Ram 1500 driven by Robert Lane of Covington was going south in the northbound lane and Darryl Winquist of Appleton, NY tried to move into the left lane to avoid contact, but Lane’s pick up hit Winquist’s Dodge Ram in the right front. Lane reportedly tried to leave the scene but couldn’t due to disabling damage. Winquist was taken to UPMC Soldiers and Sailors for treatment of minor injuries. Lane was not hurt but was arrested for DUI.

Troopers at Mansfield revived a 25 year old Roger Hurd of Tioga after he od’d early last Wednesday morning at the Green Machine Car Wash in Tioga Township. Authorities determined Hurd had consumed methamphetamines and was slumped over the center console of his 2007 Chevrolet Cobalt and administered one dose of Naloxone. Hurd was taken by ambulance to UPMC Soldiers and Sailors.

State police at Mansfield arrested a woman, no address provided for drug possession after they responded to a report of a disabled motorist on the Arnot Road just before 10:00 am March 8 and found the suspect passed out in the driver’s seat with the engine running, the 2011 Chevrolet in drive and her foot on the brake.

A burglary at a Charleston Township home February 22 or 23. A home on Ashley Road belonging to a 74 year old man and a 71 year old woman was entered but police did not release any further details.

Vandalism occurring on Ely Hill Road in Charleston Township, Tioga County Monday night was investigated by troopers at Mansfield. Someone used a rock to cause $80 in damage to a mailbox owned by a 64 year old Wellsboro man.

A Ridgway driver has been arrested for DUI and speeding after being stopped Tuesday afternoon on the Long Level Road in Ridgway Township. State police allege they observed 65 year old Richard Duchi driving his 1995 Jeep twice the speed limit. And when they questioned Duchi troopers allegedly found he was driving under the influence of drugs and alcohol.
DUI charges are also being filed against a 39 year old Johnsonburg man. Police did not release his name, but say the suspect was arrested early Sunday morning on the Old State Road in that town when officers allegedly saw him committing a traffic violation.

Statwide
Department of Conservation and Natural Resources is encouraging anglers to consider using state park campsites for overnight fishing trips as trout season approaches.. A total of 43 campgrounds throughout the state will provide camping for the April 2 opener.
DCNR has opened additional campsites to accommodate the trout season to help expand the outdoor experience. There are 86,000 miles of rivers and streams, and thousands of lakes and ponds in Pennsylvania. Much of this abundant freshwater wealth is found within our state parks and state forests – 101 state parks and 20 state forests permit fishing with the proper fishing license.
Campsites at state parks can be reserved onlineOpens In A New Window on a first-come, first-served basis or by calling 888-PA-PARKS (888-727-2757), Monday through Saturday, 7:00 AM until 5:00 PM, except on Thanksgiving Day, Christmas Day, and New Year’s Day.
State parks that accommodate trout fishing with campsite availability include:

Region
The PA Department of Health reports, there have been 44,260 Covid 19 deaths in the state to date. Deaths in the Black Forest Broadcasting Service area to date are mostly holding steady.
Cameron 20
Elk 99 (+1)
McKean 138
Potter 91