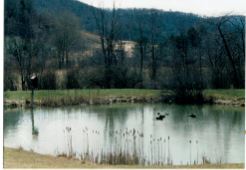 A cyber thief used personal information belonging to an Emporium couple to make multiple purchases on their credit card totaling $1694.94 this past Saturday.

Troopers at Mansfield are investigating an ID theft victimizing a 41 year old Wellsboro man. When the victim anticipated being laid off from his job, he found someone had already applied for unemployment benefits in his name.

State police at Lewis Run did not reveal details but report they are also investigating an ID theft victimizing a 49 year old Bradford man Sunday afternoon.

Slippery roads are blamed for two weekend accidents in McKean County. Katherine Hannah of Kane and her husband, Robert escaped injury Saturday afternoon on Route 6 in Hamilton Township. State police report Hannahwas  going east when her Chevrolet Tahoe slid on the slush and snow covered road, crossed to theother side, hit an embankment and rolled over. An Olean, NY driver escaped injury Sunday morning when his Chevrolet Silverado spun out of control on snow and slush covered Route 219 in Lafayette Township and rolled over before coming to rest on the driver’s side.

DUI charges are pending against a 56 year old Eldred resident after troopers stopped his 1998 Ford Fiesta on Elm Street in that town last Tuesday afternoon. Police allege he was driving under the influence of drugs.

A 34 year old Kane man is being charged for drug possession. Troopers stopped Joshua Feronti’s 2006 Buick LaCross  March 21 on Route 219 in Lafayette Township and reportedly found him in possession of a controlled substance and related drug paraphernalia.

James Dixon, 33 of Bradford has also been arrested on drug charges. State troopers claim when they stopped Dixon’s 2007 Ford F-150 for multiple traffic violations on Route 219 in Foster Township last Wednesday afternoon, they found him in possession of a controlled substance and related drug paraphernalia.

A 45 year old Kane man has been arrested for an assault allegedly taking place last Thursday afternoon on Route 66  in Lafayette Township near the McKean County line. During their investigation, cops determined the suspect had assaulted a 39 year old Kane woman during an argument.

State police at Ridgway did not release the suspect’s name but report DUI and other charges are pending against a Saint Marys man after a chase early Friday morning on the Rosely Road in St. Marys. Troopers claim the suspect failed to pull over for an emergency vehicle with lights and sirens and a pursuit followed. The driver of the 2002 GMC Sierra finally pulled into a driveway but refused to get out of the driver’s seat. When he was forcibly removed, he allegedly shoved the trooper and was subsequently placed under arrest and was taken to Penn Highlands Elk for chemical testing.

A group of lawmakers from the Northern Tier, as well as central and western Pennsylvania, will soon introduce a package of bills aimed at improving communities’ abilities to clear creeks and streams to help prevent flooding and protect lives and property.

The bills grew out of a House Majority Policy Committee hearing held last December in Tioga County, which featured testimony from county and local officials in Tioga and Bradford counties; conservation officials from the Department of Environmental Protection (DEP), Pennsylvania Fish and Boat Commission and local conservation districts; and farmers and landowners.

“The response to the hearing late last year was tremendous, and the testimony presented made it clear that one of the biggest challenges our communities face with stream clearing is a cumbersome and time-consuming permitting process,” said Rep. Clint Owlett (R-Tioga/Bradford/Potter). “With this package of bills, we aim to streamline permitting to ensure our communities are able to properly maintain our creeks and streams to minimize the risk to lives and property in the event of excessive rainfall.”

The stream maintenance package of bills includes the following:

House Bill 2405 (Rep. Tina Pickett, R-Bradford/Sullivan/Susquehanna): Would create a program that allows counties to opt in to address hazards within their streams by allowing for emergency maintenance permits in consultation with their county conservation district. This is modeled after a pilot project that has proven successful in Bradford County

House Bill 2406 (Rep. Jonathan Fritz, R-Susquehanna/Wayne): Would create a permit specific to smaller maintenance projects for the mitigation of flood-related hazards of less than 250 linear feet. This permit would be reviewed and issued by the local county conservation district.

House Bill 2407 (Rep. Joe Hamm, R-Lycoming/Union): Would clarify that the Pennsylvania Fish and Boat Commission has no authority for permitting or enforcement related to stream clearing or maintenance activities. This authority shall belong solely to DEP and the county conservation districts as appropriate.

House Bill 2408 (Rep. Mike Armanini, R-Clearfield/Elk): Would declare that no permit or authorization shall be required for maintenance activities conducted on a culvert.

House Bill 2409 (Rep. Tim O’Neal, R-Washington): Would state that no permit shall be required for the removal of flood-related hazards from streams that are deemed to be an emergency by a state or county.

House Bill 2410 (Rep. Brian Smith, R-Jefferson/Indiana): Would state that no permit shall be required for stream maintenance activities conducted 50 feet or less upstream or downstream of a bridge or culvert.

House Bill 2411 (Rep. John Hershey, R-Mifflin/Juniata/Franklin): Would require DEP to issue an annual report to the General Assembly regarding flooding and stream maintenance and restoration.

The PA Department of Health reports, there have been 44211 Covid 19 deaths in the state to date. Deaths  in the Black Forest Broadcasting Service area  to date are mostly  holding steady.