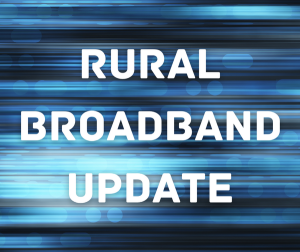 Grant will expand broadband services in McKean County…See story below.

Following a 2-day jury trial at the McKean County Courthouse, 30 year old  Colton Jacob Milliron of Eldred,  was convicted of Indecent Assault, False Imprisonment, Recklessly Endangering Another Person, Harassment and Criminal Mischief.  The jury found him not guilty of Aggravated Assault, Simple Assault, Indecent Assault (forcible compulsion) and 2 counts of Aggravated Indecent Assault. The jury was unable to agree on a verdict for a count of Strangulation, so the Court declared a mistrial as to that count which can be retried by the Commonwealth.

The trial was the conclusion of a case investigated by Trooper Alyssa Maxwell of the Pennsylvania State Police after she was dispatched for a report of a domestic assault in Eldred Township on January 30, 2021.  She and Trooper Andy Eliason responded to the residence along with Otto Eldred Regional Police Chief Don Nies.  The jury found that the crimes he was convicted of were committed against a household or family member which carries an enhanced sentence.

The defendant will undergo an assessment pursuant to the law formerly known as Megan’s Law and will be sentenced following that evaluation.

District Attorney Stephanie L. Vettenburg-Shaffer prosecuted the case on behalf of the Commonwealth.

Another ID theft is being investigated by state police at Lewis Run. Troopers say a 56 year Mt. Jewett woman told

them she had received two emails from Chase Bank which said she had opened a checking account and would be receiving a credit card in the mail. State police warn the public to be vigilant about such scams.

DUI charges are being filed against a 29 year old Bradford woman by state police at Lewis Run. Troopers did not release the suspect’s name but arrested her after stopping her Chrysler Pacifica on Davis Street in Bradford early last Thursday. Authorities allege the suspect was driving the SUV under the influence of a controlled substance.

Troopers at Lewis Run are filing drug possession charges against 34 year old Lamar Smith of Erie following a traffic stop on S. Kendall Avenue just after 3:00 am this past Saturday. Authorities allege Smith was found in possession of a controlled substance.

An Amherst, NY man is also being arrested for DUI after his 2008 Acadia was stopped on E. Main Street in Bradford early Sunday morning. Police claim 48 year Kianti Dillard was driving his SUV under the influence of a controlled substance.

A St. Marys man escaped injury in a DUI crash early February 20  in Ridgway.  Troopers report Marquavious Smith was going west when his 2017 Jeep traveled off the road and collided with a snow bank, then veered across both lanes and rolled over coming to rest in a ditch. The driver was not using a seatbelt and was able to get out of the Jeep under his own power.

No injuries were reported for a Sun Valley, NV driver after a car/deer encounter early last Friday morning in Charleston Township, Tioga County. State police at Mansfield report Steven Wheeler was headed east on Route 6 when he swerved his Nissan Sentra to avoid a deer. The car traveled across both lanes and rolled end over end twice before stopping. Wheeler was cited for failing to have a signed registration card and failing to exhibit on command.

Sen. Cris Dush (R-25) and Rep. Martin Causer (R-Cameron/McKean/Potter) have announced a grant of more than $530,000 to advance broadband access in McKean County.

The grant was awarded through the Unserved High-Speed Broadband Program to SkyPacket Networks Inc., which has been working with McKean County commissioners to enhance broadband service in the county. The company will use the funding to help install fixed wireless broadband infrastructure in Hamlin, Keating and Sergeant townships.

“Broadband service is a necessity, not a luxury, and I am pleased to see this sizable investment in expanding access to more people in McKean County,” said Causer, who authored the legislation creating the grant program. “I look forward to more investments like this one across the Northern Tier to ensure our students, families, employers and health care providers have the high-speed internet service they need.”

“Rural Pennsylvanians have been suffering from a lack of interest on the part of major providers in providing broadband to our region of PA,” said Dush. “Our local governments and smaller providers like SkyPacket have been doing some out-of-the-box thinking to develop ways to provide what is, in this day and age, a critical service to our constituents, schools, employers and health care services. I was excited to support Rep. Causer’s bill in the Senate to help our local government partners gain resources to complete projects like this for our underserved constituents.”

According to its grant application, SkyPacket is planning to expand its fixed wireless broadband network by installing two new 120-foot towers. SkyPacket is working with McKean County and private landowners to secure lease agreements for the two tower site locations. The proposed infrastructure will provide speeds of at least 25 Mbps download and 3 Mbps upload and maximum speeds of 100 Mbps download and 20 Mbps upload. The project will provide service to 212 residential structures and four business structures.

The funding was approved by the Commonwealth Financing Authority at its meeting last  Tuesday.

The PA Department of Health reports, there have been 44,091 Covid 19 deaths in the state to date. Deaths  in the Black Forest Broadcasting Service area  to date are mostly  holding steady.