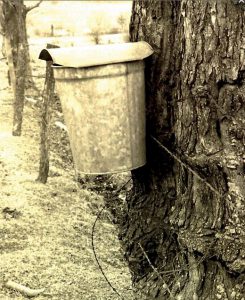 The Potter-Tioga Maple Weekend is this Saturday and Sunday. See details on our Calendar page.

.A cyber theft victimizing a 17 year old Genesee boy March 5 is being investigated…Minor damage was reported when a snow plow backed into a pickup truck on S. Main Street in Richmond Township Tioga County last Saturday….Troopers at Lewis Run are investigated a reported sexual assault….

A cyber theft victimizing a 17 year old Genesee boy March 5 is being investigated by state police at Coudersport. A criminal hacked the teen’s phone and transferred $281.00 from his Venmo account.

Both drivers escaped injury in a minor mishap occurring Saturday morning on S. Main Street in Richmond Township, Tioga County. State police at Mansfield report a Ford F550 which was plowing snow in the Dunkin’ Donuts parking lot, backed onto Route 15 and hit  a southbound  2006 Silverado in the rear passenger door. The trucks could be driven from the scene and since there were no injuries the collision was considered a “non-reportable.”

A criminal trespass in Tioga, PA a little after 3:00 am February 27, was investigated by Mansfield based state police. An unknown intruder entered the home of Zachary Adam at 12 Center Street without  his permission but apparently nothing was disturbed or taken.

Troopers at Lewis Run are investigating the report of a statutory rape/sexual assault occurring between March 1, 2017 and this past Wednesday in Hamilton Township. No further information was released.

Many small businesses have been hit hard by the COVID-19 pandemic, and a lot – such as restaurants and bars – continue to struggle.

Sen. Dan Laughlin and Sen. John Yudichak, have introduced Senate Bill 1138 to permanently allow bars and restaurants to sell cocktails-to-go. Earlier during the pandemic, as part of efforts to address the impacts of the governor’s COVID emergency declaration, the ability to sell cocktails-to-go by bars and restaurants was temporarily granted to give them a new source of revenue.

During a recent hearing conducted by the Senate Community, Economic & Recreational Development Committee, statewide business advocates and entrepreneurs told lawmakers that recovery has not started for many small businesses.

A January 2022 National Restaurant Association operator impact survey showed that 76 percent of restaurant operators have lower sales volume now than they did prior to the pandemic. Unpredictability has plagued the industry for 20 months and recovery will likely take years,” said Lauren Brinjac, senior director of government affairs for the Pennsylvania Restaurant & Lodging Association (PRLA). “In 2020, the state allowed for the temporary sale of mixed drinks to-go and we saw then that Pennsylvanians love having that choice and it helps bars and restaurants.”

“While cocktails-to-go served as a lifeline during the COVID-19 emergency declaration, it also provided a way for family-owned establishments to expand their product offerings and increase customer convenience,” added Chuck Moran, executive director for Pennsylvania Licensed Beverage and Tavern Association (PLBTA). “Unfortunately, the end of the emergency declaration also meant the end to these products. This was a loss to both our industry and our patrons.”

According to the Distilled Spirits Council of the United States, 33 states adopted alcohol-to-go programs in the early days of COVID-19, with 16 of those states making their programs permanent, while another 15 have provided extended approval to their programs. Across Pennsylvania’s borders, New York’s governor has urged making drinks-to-go permanent, while New Jersey lawmakers approved legislation last year allowing local governments to authorize cocktails-to-go.

After its introduction, SB 1138 was referred to the Senate Law and Justice Committee.

The PA Department of Health reports, there have been 43,992 Covid 19 deaths in the state to date. Deaths  in the Black Forest Broadcasting Service area  to date are mostly  holding steady.