A 49 year old Emporium man has been jailed, in lieu of $250,000 bail on charges of discharging a firearm in an occupied structure, reckless endangerment, terroristic threats, simple assault, harassment, disorderly conduct . State police did not reveal the suspect’s name but say the charges are in connection to a domestic violence incident taking place early

Saturday morning at a  home on the Sizerville Road in Portage Township. State police were called by a 39 year old woman who told them her husband came home intoxicat4ed and a physical altercation followed. The victim told troopers her husband had fired his pistol several times into the floor of the residence and continued to yell. When he briefly ran out of ammunition, the woman was able to get out and run to a neighbor’s house and heard several more shots being fired. When troopers Bauer and Goodrow arrived on scene, the suspect was allegedly yelling out to window warning them to leave and stated he had a rifle. A perimeter was established and after a short time, the suspect left the house unarmed and was taken into custody without further incident.

for vehicle theft. Authorities allege Shaffer took a 2017 Chevrolet Cruze owned by 31 year old Shawn Pickup of Galeton between noon January 13 and 11:15 pm January 14 without permission. Anyone who knows of Shaffer’s whereabouts is asked to call state police at 814.274.8690.

An ID theft victimizing a Galeton resident is also being investigated by state police at Coudersport. Someone used the personal informati9on of 49 year old Willis Shadle to open bank accounts in his name. 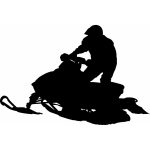 DUI charges are pending against a snowmobiler after a crash Saturday evening on the Red Ridge Road in Wharton Township Potter County. Police allege the unidentified operator was operating the machine under the influence and drugs were found on his person. Charges will be filed pending blood test results.

The death of a 14 year old Emporium girl on the afternoon of February 5 remains under investigation by state police at Lewis Run. When troopers responded to a rollover of a UTV on Scaffold Lick Road in Liberty Township, they found the body of the teen.

A Mt.Jewett woman escaped injury in a one-vehicle accident Monday afternoon on East Main Street in that town. Troopers report a westbound Dodge Ram 2500 driven by Jane Compton when went off the road and struck a snow bank when she swerved to avoid a tractor trailer passing in the opposite lane.

The AgriStress HelpLine for Pennsylvania is available 24 hours a day, seven days a week. Farmers can call 833-897-AGRI (2474) to speak to a healthcare professional.

The AgriStress HelpLine for Pennsylvania is supported by a $500,000 grant from the U.S. Department of Agriculture National Institute of Food and Agriculture Farm and Ranch Stress Assistance Network awarded to the Pennsylvania Department of Agriculture to carry out programming to address farmer stress and suicide. In addition to the Department’s partnership with AgriSafe to launch the hotline, the grant dollars support mental health resources available through the Center for Dairy, marketing to increase mental health awareness and reduce stigma, and regional collaboration with the National Young Farmers Coalition.

According to the American Farm Bureau Federation, financial challenges, farm or business problems and the fear of losing the farm are top contributors to farmers’ mental health. Cost, embarrassment and stigma often prevent farmers from seeking help or treatment for a mental health condition.

The AgriSafe Network is a non-profit organization that strives to reduce health disparities in agricultural communities. AgriSafe supports a network of trained agricultural health and safety professionals to provide preventative services for farm families. The AgriStress Response Network seeks to eliminate the stigma around accessing support for mental health including stress, depression, anxiety and suicide.

Anyone who works in Pennsylvania agriculture and wants to talk to someone is encouraged to contact the AgriStress Helpline by calling 833-897-AGRI (2474).

For more information about the AgriStress HelpLine for Pennsylvania, visit agriculture.pa.gov and click on the Mental Wellness icon.