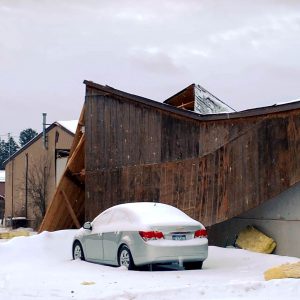 The roof at the Coudersport Good Will caved in Friday afternoon due to heavy snow and ice accumulation. Photo courtesy of Coudersport Volunteer Fire Department. See story below.

In less than a year, Coudersport has suffered devastating blows to three businesses. On April 2, 2021 Kaytee’s Restaurant on Route 6 East was destroyed by fire . Although nearly 200 volunteer firefighters  battled the blaze, there were no injuries. Within two weeks, owner Wendee Brown was able to re-open the produce and plant portion of the store.  The restaurant is currently being rebuilt and a spring re-opening is anxiously being anticipated by residents and visitors alike. This past Friday, February 4 at a little after 5:00 pm, the roof on the Goodwill Store, also on Route 6 East, caved in due to a heavy build up of snow and ice. Coudersport Volunteer Fire Department Chief Bryan Phelps told Black Forest Broadcasting there were three employees and eight customers inside the structure when the roof collapsed. Two people were taken by ambulance and two by private vehicle to UPMC Cole for treatment of minor injuries. All were treated and released. The building, owned by Thomas Majot, was constructed, according to code, some 20 years ago and originally housed a Dollar General Store. Some 100 are volunteer emergency services personnel responded to the scene. Then, about 24 hours later, Saturday afternoon, Firefighters were called to Olga’s Café at the corner of Main and East Second Street  when a fire broke out on the second floor.  Volunteers were able to keep flames from spreading to the adjacent building which 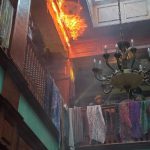 contained apartments and to the first floor of the popular bistro. Despite fighting the fire in adverse weather conditions, only two firefighters suffered minor injuries—one was treated and released at UPMC Cole and the other was treated at the scene. Several nearby businesses provided refreshments and a warm place for firefighters during the call. Steps were taken as soon as possible to cover the second floor and to begin drying out the first floor. Chief Phelps said all businesses were insured and damage in each case ranges from an estimated $350,000 to $500,000.Several area departments responded to both calls. Chief Phelps credited members of each department for their training and dedication  and thanked others who gave aid to the firefighters. Photo courtesy of Coudersport Volunteer Fire Department.

A Galeton driver has been cited for speeding after a one-vehicle crash Friday evening in Ulysses. Coudersport based state police report Justin Button was going north on South Street when his Chevrolet Avalanche went off the right side of the road, hit a “Yield” sign and a snow bank before traveling down an embankment and coming to rest in a field. Button was not hurt.

Troopers also cited Judy Burrell of Port Allegany for speeding after a crash last Thursday morning in Eulalia Township, Potter County. Burrell’s  westbound Buick Lacrosse went off the road near the Olmstead Road, struck a mailbox and a guardrail before re-entering Route 6 at Lehman Run and colliding with a bridge abutment. Burrell was treated at UPMC Cole for minor injuries.

No injuries were reported for a 17 year old Coudersport boy after a one-vehicle crash last Thursday afternoon also in Eulalia Township. Authorities report the teen driver as going too fast for road conditions causing his Ford F250 to fishtail of the right side of Buffalo Street, spin 180 degrees before coming to rest on the driver’s side. Police said the youth was not using a seatbelt.

Mansfield based state police are investigating an indecent assault reportedly taking place on the afternoon of July 23 in Westfield Township. A 65 year old Westfield woman is the victim and the crime allegedly took place in a 2017 Honda Accord Cross Tour.