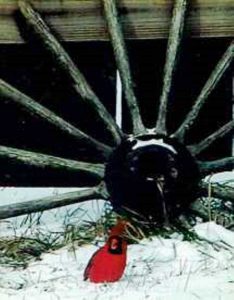 A camp burglary taking place between October 1 and this past Sunday at 86 Gas Company Lane in Sharon Township is being probed by troopers at the Coudersport barracks. Thieves tried to force their way into the camp owned by Rickie Henry of Shermans Dale, PA by breaking two doors and several windows. Damage is estimated to total $300.

A Troupsburg, NY driver was unhurt in a one-vehicle crash Monday morning. According to Coudersport based state police, Taylor Stone was going east on South Street in Ulysses when his 1993 Ford F250 Supercab went off the road and into a ditch. After entering the ditch, the truck hit a fence, spun around and came to rest in the ditch. Stone was cited for speeding prior to the crash.

No injuries were reported for an Ebensburg, PA man whose pickup wrecked Sunday night in West Branch Township, Potter County. Troopers at the Coudersport barracks report Charles Pittsinger was going east on the Crippen Road when his 2020 Dodge Ram 1500 failed to make a right hand turn and struck an embankment for coming to rest on the driver’s side.  Police said Pittsinger was not using a seatbelt and is suspected of DUI.

Six women and two men are being sought for roles in Hamilton-Gibson’s production of “Into The Breeches” written by George Brant. Auditions are today  at 6:30 p.m., Saturday, Jan. 29 at 10:30 a.m. and Sunday, Jan. 30 at 1 p.m. at the Warehouse Theatre at 3 Central Avenue in Wellsboro. No experience is necessary to audition.

The comedy explores how a community theatre grapples with the loss of its male artistic director and leading men who are fighting across the sea in World War II. In the time-honored tradition of “the show must go on”, the director’s wife sets out to produce an all-female version of Shakespeare’s “Henriad”, assembling an unexpected team that delivers through collaboration and persistence.

All members of the cast and crew will be masked during all auditions, meetings and rehearsals. All those who audition along with crew members and volunteers are asked to be either fully vaccinated against the COVID virus or to have begun the process, due to the close proximity of the rehearsal and performance environment. Performances will be on Friday, Saturday and Sunday, April 1, 2 and 3, and Friday and Saturday, April 8 and 9 at the Warehouse Theatre. Sponsors are Larry and Barbara Biddison.For more information or for answers to questions or concerns about this production, email Director Thomas Putnam at hamgib@gmail.com or call Hamilton-Gibson at 570-724-2079.

Maybe this will make you feel better. The Department of Food Science in Penn State’s College of Agricultural Sciences will offer an innovative bean-to-bar course for both craft and industrial chocolate manufacturers June 20-23.The four-day Penn State Chocolate Short Course, which will be presented in the Rodney A. Erickson Food Science Building on the University Park campus, will be of value to those with both technical and nontechnical duties. Attendees will engage both their minds and hands to gain detailed knowledge of chocolate processing.During the short course, successful craft-chocolate entrepreneurs, equipment manufacturers and Penn State faculty will instruct participants in the theory and practice of chocolate production from the selection of raw materials through the marketing of the finished product. Penn State’s Department of Food Science has conducted research about chocolate quality and manufacturing for decades. The findings of many of those studies will be incorporated into the short course, according to Gregory Ziegler, distinguished professor of food science, and Helene Hopfer, Rasmussen Career Development Professor of Food Science, who are coordinating the event. Most recently, Hopfer and colleagues published a study conducted at Penn State of how roasting time and temperature of cocoa beans influence bitterness and other important sensory characteristics that affect consumer liking of chocolate. The lead researcher in that study, Alan McClure, founder of Patric Chocolate in Columbia, Missouri, also will speak at the short course. For more information about the short course or to register, visit the course website or call 877-778-2937.