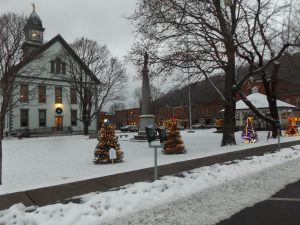 Winners of the 2021 Christmas Tree Decorating Contest in Coudersport have been announced. See story below.

Winners of the Coudersport Area Chamber of Commerce’s Christmas Tree Decorating Contest have been announced.

The Judges noted there were outstanding themes/ heartwarming and engaging and several “giving” themes and”lighting is getting better every year.”

Coudersport based state police have charged an Ephrata, PA man for DUI. Ralph Sharp, 66 was arrested on November 13, 2021 following a one-vehicle crash on Route 6 East in Pike Township.

Troopers at Lewis Run arrested a 20 year old Reading driver for drug possession after stopping his 2002 Honda on Boot Jack Road November 10 for a traffic violation. Authorities claim the suspect whose name they did not release was in possession of drug paraphernalia and  a small amount of marijuana.

A Gallitzin Boro PA man was arrested in Elk County Friday afternoon for violating a Protection from Abuse Order. Troopers at Ridgway say Scott Kessler was released on $10,000 bond. The allege the violation  occurred Friday afternoon on Route 153. The victims are listed as 25 year old Courtney Kessler and a two year old boy.

An Emporium woman is accused of shoplifting at the St. Marys Walmart between September 5 and October 14. Authorities allege Marie Osti, 34, stole $846.58 worth of merchandise by changing price tags at the self checkout counter.

No injuries were reported for a Westfield woman after a one-vehicle accident Sunday morning in Gaines Township. According to Mansfield based state police, Angela Bixby was going east on Route 6 when her Chrysler 200 spun off the road and struck a tree with the driver’s side door. She was cited for speeding.

Mansfield based state police investigated a burglary taking place at 44 Walker Road in Covington Township. Someone

Senator Camera Bartolotta’s (R-46) bill to allow farmers to use a Class A, B or C driver’s license when operating farm vehicles with a combined weight of more than 26,000 pounds on roadways was recently signed into law.

A Class A driver’s license is a graduated license above the common Class C license and requires an additional road test and fee.

Act 170 of 2014 clarified that farmers did not need a CDL when operating farm trucks, or farm trucks hauling trailers, with a combined weight of more than 26,000 pounds. However, it was unclear as to whether a farmer could use a Class C or Class A driver’s license when operating those vehicles.

Even though Act 170 was supposed to reduce burdens on farmers, the Pennsylvania State Police has been requiring farmers to have a non-commercial Class A driver’s license with weights that exceed 26,000 pounds.

The Pennsylvania Department of Health today confirmed that over the five-day Thanksgiving holiday a daily average of 5,325 new cases of COVID-19 were reported. As of Sunday, Nov. 28, the statewide cumulative total cases was 1,731,154.

Currently, there are 3,593 individuals hospitalized with COVID-19. Of that number, 816 patients are in the intensive care unit with COVID-19. The trend in the 14-day moving average number of hospitalized patients has increased. Statewide percent positivity for the week of Nov. 19 – Nov. 25 stood at 12.1%.

Between 11:59 p.m. Wednesday, Nov. 24 and 11:59 p.m. Sunday, Nov. 28, there were a daily average of 41 new deaths identified by the Pennsylvania death registry and reported for a cumulative total of 33,308 deaths attributed to COVID-19. County-specific information and a statewide map are available on the COVID-19 Data Dashboard.

According to the CDC, as of Sunday, Nov. 28, 68.9% of Pennsylvanians age 18 and older are fully vaccinated.

6,612,734 people are fully vaccinated; with 166,538 vaccinations administered since Nov. 23 and a seven-day moving average of more than 41,700 people per day receiving vaccinations.