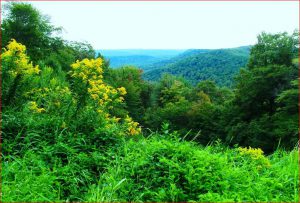 A Coudersport couple escaped injury when their pick up truck hit a bear on Route 6 Monday evening in Roulette Township. State police report Robert Smith was going east on Route 6 when the bruin jumped over the guardrail near the Reed Run Road. Smith and his wife Melanie were using seatbelts at the time.

A downstate man is facing various charges in Potter County after nearly colliding head-on with  Sweden Township Police Chief Bryan Phelps Wednesday afternoon.  After avoiding a collision with a gray sedan, Chief Phelps turned around and began chasing the car which turned onto Burrows Road.

As Chief Phelps passed the upper intersection of Burrows Rd x N Hollow Rd the suspect vehicle was approaching that intersection ( on Burrows Rd )  he was able to make contact with the male operator, his female passenger and her minor child.

Phelps determined  that the operator had consumed alcohol and he allegedly  admitted that he was probably over the legal limit. ( .08% ). A Field Sobriety Tes was administered and  reportedly showed an reading of . 164 ( over 2x legal limit ).  The suspect, whose name was not released was found to be driving with a suspended license.

Charges will be filed upon official blood results.

No injuries were reported for a truck driver whose rig collided with a turkey in Tioga Township, Tioga County. The Freightliner was going south on Route 15 July 24 when the bird flew into the side of the cab, damaging the mirror.

State police at Mansfield arrested a 40 year old Osceola man on an out of state warrant. Troopers did not release details but say the suspect was taken into custody on the morning of July 21 at 8760 High Street  in Liberty Borough.

Members of the Pennsylvania State Police (PSP) arrested 587 motorists for driving under the influence and issued 9,968 speeding citations during the four-day Labor Day weekend from Sept. 3-6, 2021.

Troopers also cited 737 people for not wearing seatbelts and issued 120 citations to drivers for failing to secure children in safety seats.

Six people lost their lives in crashes investigated by the state police, with alcohol cited as a factor in one of the fatal collisions. Troopers responded to a total of 674 crashes – in which 209 people were injured – over the long holiday weekend.

During the 2020 Labor Day weekend, seven individuals died and 186 people were injured in the 678 crashes investigated by PSP.

There are 2,010 individuals hospitalized with COVID-19. Of that number, 496 patients are in the intensive care unit with COVID-19.

The trend in the 14-day moving average number of hospitalized patients continues to increase again. Statewide percent positivity for the week of Aug. 27 – Sept. 2 stood at 8.2%.

As of 11:59 p.m. Tuesday, Sept. 7, there were 38 new deaths identified by the Pennsylvania death registry, reported for a total of 28,446 deaths attributed to COVID-19. County-specific information and a statewide map are available on the COVID-19 Data Dashboard.

According to the CDC, as of Tuesday, Sept. 7, 66.6% of Pennsylvanians age 18 and older are fully vaccinated.

Vaccine providers have administered 12,349,956 total vaccine doses, including 46,701 additional doses authorized for people who are immunocompromised, as of Wednesday, Sept. 8.

6,020,480 people are fully vaccinated; with 17,717 vaccinations administered since yesterday and a seven-day moving average of more than 16,700 people per day receiving vaccinations.

Approximately 30,384 of total cases have been among health care workers.