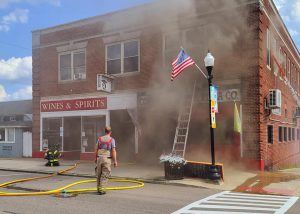 The cause of a fire which destroyed a Smethport restaurant Tuesday afternoon has not been determined. Volunteers were dispatched at around 3:30pm to the Corner Bistro where flames and smoke were seen by the first responders. A second alarm was sounded and a third alarm brought in additional departments. The investigation revealed that the blaze originated in the kitchen. There were no injuries but damage  is estimated to be $50,000 State police  have amended their information and now say the building was insured.. It is the second major restaurant fire to hit the area in the last couple of months. Kaytee’s Restaurant on Route 6 West in Coudersport was heavily damaged by an accidental fire May 2. As rebuilding awaits, the business has stayed open providing trees, shrubs, flowers and animal  food.

Drug charges were lodged against two Bradford residents after troopers stopped a 2012 BMW on East Corydon Street in the city early Saturday morning. Police claim 25 year old Alisha Alzubi and 24 year old Triston Thompson were under the influence of alcohol and a controlled substance. Troopers did not indicate which suspect was the driver and which was the passenger but allege the driver refused a blood draw which will result in automatic charges and the passenger was allegedly found in possession of a concealed loaded handgun. The passenger was committed to the McKean County Jail in lieu of $20,000 bail.

The theft of some medication at Sena Kean Manor last month was investigated by state police at Lewis Run. An oxycodone tablet was stolen during the afternoon hours.

Theft charges have been dropped for a suspect who was hired to complete a tree trimming job at 19 Rew Service Road last week. The suspect whose name was not released took the $200 last week but did not finish the work.  After being contacted by state police, the suspect completed the work.

Mara Fontaine, 31, of Smethport was arrested by state police for physical harassment. Authorities claim she pushed a 39 year old Smethport man during an argument on the East Valley Road Monday night.

Troopers at Ridgway investigated another ID theft. Someone made a fraudulent  unemployment claim using the name of 64 year old David Parsons of Ridgway. The claim was denied by his employer because he is not unemployed.

Two teenage girls have been cited for physical assault in connection to an incident allegedly taking place last Friday afternoon at the Roulette Municipal Park. Troopers say a 17 year old from Port Allegany and a 17 year old from Roulette physically assaulted each other during an argument.

Community Foundation Scholarships can be established by individual donors, corporations, and are often in honor or in memory of a loved one.

Founded in 2003, the Community Foundation for the Twin Tiers serves 5 counties, Bradford, Potter, Sullivan and Tioga counties, PA and Tioga County, New York. The Foundation is committed to building philanthropic resources that will sustain healthy and vital communities now and into the future. The Foundation currently manages over 115 funds valued at over $8.2 million dollars and has awarded over $1.4 million in grants and scholarships since inception, positively impacting hundreds of lives in the region. For more information on its work in the community contact Suzanne Lee at 570.888.4759. Please visit our website at www. twintierscf.org.

The Pennsylvania Department of Health today confirmed that as of 12:00 a.m., Tuesday, June 29, there were 162 additional positive cases of COVID-19, bringing the statewide total to 1,211,869.

As of 11:59 p.m. Monday, June 28, there were 13 new deaths identified by the Pennsylvania death registry, reported for a total of 27,670 deaths attributed to COVID-19. County-specific information and a statewide map are available on the COVID-19 Data Dashboard.

According to the CDC, as of Monday, June 28, 60% of Pennsylvanians age 18 and older are fully vaccinated while 75.3% have received their first dose.

According to the CDC, as of Monday, June 28 Pennsylvania ranks 5th among all 50 states for total doses administered.

5,371,801 people are fully vaccinated; with a seven-day moving average of more than 17,500 people per day receiving vaccinations.

1,333,173 people are partially vaccinated, meaning they have received one dose of a two-dose vaccine.

The department continues to urge Pennsylvanians to follow CDC guidanceOpens In A New Window for wearing a mask where required by law, rule and regulations, including healthcare, local business and workplace guidance. For the protection of themselves and others, individuals who have not yet been vaccinated or are partially vaccinated, are still encouraged to wear a mask when in public.

Approximately 29,007 of the total cases are among health care workers.

All Pennsylvanians age 12 and older are eligible to schedule a COVID-19 vaccine.