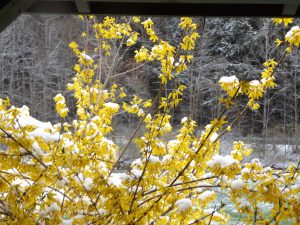 Potter County
The Coudersport borough police and fire department are looking for clues into the origin of a dumpster fire on West Second Street early Monday morning. When Fire Chief Bryan Phelps arrived on scene he found two dumpsters fully involved and flames had spread to a nearby wooden fence. Volunteers were able to douse the fire in about a half an hour. Anyone with information is asked to call police at 274-8970 or 911.

McKean County
State police at Lewis Run are looking for a gray sedan suspected of a hit and run in Ceres Township Monday afternoon. The unknown car went off the west side of Route 44 and drove through a wired fence before leaving the scene headed south. Pieces from the offending unit were found near the scene. Anyone with information is asked to call state police at Lewis Run 814.368.9230.

DUI charges are pending against a 33 year old Bradford man whose 2019 Toyocar van container trailer was pulled over on South Kendall Avenue in Bradford early Sunday morning for traffic violations. Police allege the suspect was driving under the influence of alcohol and was taken to Bradford Regional Medical Center for blood work.

A James Creek PA woman escaped injury when her car hit an elk Monday evening on the CCC Highway in Lumber Township. State police at Emporium report Debra States was going east when the elk came onto Route 120 in front of her Mitsubishi Outlander . States was unable to avoid the collision which proved to be fatal for the elk.

Statewide
Rep. Clint Owlett’s (R-Tioga/Bradford/Potter) bill to ensure Commonwealth policies make it easier rather than harder for people to do business here has been approved by the House Professional Licensure Committee.
House Bill 855 would require the Bureau of Professional and Occupational Affairs (BPOA) to provide individuals seeking to become licensed in Pennsylvania the option of applying by paper application under certain circumstances, rather than using the online PALS licensing system.

“Not all of our citizens can or want to process their professional licenses online, and they should not have to,” Owlett said. “I became aware of this issue when an auctioneer in my district called for help after the bureau refused to offer an alternative to its online licensing. They ultimately agreed to help this one time and allowed him to renew his license by paper, but they also said it would be the last time.
“What kind of customer service is that?? Online licensing works great for many people, but not for those who do not have access to a computer or those who have personal convictions against using computers or credit cards. My bill will ensure BPOA meets the needs of all of our hard-working professional licensees,” he added.

Currently, BPOA offers only a religious exemption from use of the PALS system. Owlett does not think it’s fair to put people in the position of either lying about why they don’t want to use the computer system or using a system they are not comfortable with or are simply unable to use.

According to research by the Center for Rural Pennsylvania, 15% of people residing in Owlett’s 68th Legislative District do not own computers. Statewide, the rate is 12%.
House Bill 855 now goes to the full House for consideration.

The most accurate daily data is available on the website, with archived data also available.
As of 11:59 p.m. Monday, April 19, there were 77 new deaths identified by the Pennsylvania death registry, reported for a total of 25,767 deaths attributed to COVID-19. County-specific information and a statewide map are available on the COVID-19 Data Dashboard.

Vaccine providers have administered 7,254,446 total vaccine doses as of Tuesday, April 20.
2,828,907 people are fully vaccinated; with a seven-day moving average of more than 97,400 people per day receiving vaccinations.