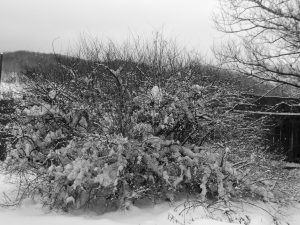 The region’s unemployment picture improved between September and October improved according to the state Department of Labor and Industry. Potter County saw a decrease from 6.3 to 5.8%; McKean County realized an improvement from 6.3 to 5.8%; Cameron County’s rate went down from 7.4 to 6.6%. Tioga and Elk Counties had identical results. We don’t know if it was a typographical error or actual figures. The two counties reportedly dropped from 6.4 to 5.9%. Chester County had the best rate at 3.4% which was down from 3.7% and Fayette County had the worst rate at 7.5 but improved from 8.3%. Pennsylvania’s overall jobless rate for the period was 6.0% while the national figure was 4.6%, both down two tenths of a point.

Pennsylvania State Police Troop C – Lewis Run Barracks has enlisted the help of Pennsylvania Crime Stoppers in finding a burglary who stole money from the Get Away Motel, 2952 Route 219, Hamlin Township, McKean County on Friday November 26, 2021. The suspect broke into the office and removed $100 from the cash register. He was wearing a light colored “hoodie”. His image was captured by surveillance video however no characteristics have been released. Anyone

having information on this incident or if you can identify the suspect is asked to anonymously contact the Pennsylvania Crime Stoppers Toll Free at 1-800-4PA-TIPS (8477) or online at https://www.p3tips.com/tipform.aspx?ID=107 All callers to Pennsylvania Crime Stoppers remain anonymous and could be eligible for a CASH REWARD for information that leads to an arrest, the solving of a crime/cold case or the location of a wanted person/fugitive or missing person.

Troopers at Emporium have not released the names of two recent DUI suspects. A 44 year old Emporium man was arrested last Wednesday night when state police responded to a call at 3764 Rich Valley Road at around 11:30p and found the suspect inside his 2013 Jeep with the engine running, parked on the lawn of a neighboring residence. Authorities claim he was intoxicated when he drove to the scene. A 29 year old St. Marys woman is also facing DUI charges. Her 2008 Ford Explorer was pulled over on Route 120 in Shippen Township early last Saturday morning.

The trend in the 14-day moving average number of hospitalized patients is increasing.
Statewide percent positivity for the week of Nov. 19 – Nov. 25 stood at 12.1%.
As of 11:59 p.m. Monday, Nov. 29, there 113 new deaths identified by the Pennsylvania death registry and reported for a cumulative total of 33,421 deaths attributed to COVID-19. County-specific information and a statewide map are available on the COVID-19 Data Dashboard.

According to the CDC, as of Monday, Nov. 29, 69.2% of Pennsylvanians age 18 and older are fully vaccinated.
Vaccine providers have administered 15,356,253 total vaccine doses, including 1,523,621 additional doses (which includes additional shots for immunocompromised individuals and booster shots).
169,661 total pediatric vaccines doses (ages 5-11) have been administered.

6,623,497 people are fully vaccinated; with 49,972 vaccinations administered since yesterday and a seven-day moving average of more than 38,700 people per day receiving vaccinations.

Donald E. HAND, 51, of Citrus Springs, FL, formerly of Galeton, PA, died Saturday, November 27, 2021. He was born June 25, 1970, in Blossburg, PA. On August 12, 2006, in Germania, PA, he married the former Angelique “Angie” Geraty, who survives. A 1989 graduate of Cowanesque Valley High School, he was employed by Lobar, Adelphia Communications, and Level 3. He was primarily employed as an x-ray technician for many years, most recently with National Visual Inspection, Inc. Don was an avid hunter and fisherman. His passion was hunting. Surviving besides his wife, Angie, are: his mother and step-father, Mary and Ted Orwig of Galeton; two sons, Matthew Hand of Citrus Springs, FL and Nicholas Hand of Selinsgrove, PA; a step-son, David (Kaeli) Steadman of Mansfield, PA; five grandchildren, Meah West, Shelby Lynn Hand, Beau Steven Hand, Ellie May Hand, and Addison Hand; a sister, Cynthia (Robert) Gitchell of Germania; aunts, uncles, nieces, nephews, and cousins. He was predeceased by his father, Byron Hand. Friends may call at Pine Creek Valley United Methodist Church, Gaines, PA on Thursday, December 2, 2021 from 2:00 – 4:00 PM, with Funeral Services following at 4:00 PM. Rev. Rick Lehman and Rev. Brent Baker will co-officiate. Burial will be in Champlin Cemetery, Westfield. Memorials may be made to a charity of the donor’s choice. Arrangements are under the direction of Olney-Foust Funeral Homes & Crematory, Ulysses, PA. Online condolences may be expressed at www.olneyfoust.com.

Sean Raymond COBB, 54, of Elma, WA, died Saturday, November 20, 2021 in Olympia. Born August 3, 1967, in Los Angeles, CA, he was the son of Raymond Julian and Carmen Ladd Cobb. Sean served as a volunteer with the YMCA, Elma Timberland Library, and the Salvation Army. Surviving are: a brother, Daniel Cobb; sisters, Susan Didrickson, Joyce Cobb, Christine Scott, Lorraine Scott, and Dianne Gruginski; nieces and nephews; grandnieces and grandnephews. He was predeceased by his parents. A graveside service will be held 11:00 AM, Friday, December 3, 2021 in the Ulysses Cemetery, Ulysses, PA. Rev. Timothy H. Miller will officiate. Memorials may be made to Ulysses Library, P.O. Box 316, Ulysses, PA 16948. Arrangements are under the direction of Olney-Foust Funeral Homes & Crematory, Ulysses, PA. Online condolences may be expressed at www.olneyfoust.com.To send flowers to the family or plant a tree in memory of Sean Raymond COBB, please visit our floral store.

Louis PASQUALE, 88, of Germania, PA, died Thursday, November 25, 2021 in his home. Born January 3, 1933, in Norristown, he was the son of Frank and Anna Bruno Pasquale. On June 25, 1961, he married the former Mary Emma Swanson, who survives. A Korean War Veteran, he served honorably with the U.S. Army from 1953 – 1955. He was employed by Tyoga Country Club in Wellsboro, Alan Wood Iron and Steel Company in Conshohocken, and St. Marys Carbon in Galeton. Louis attended Valley C&MA Church, Wellsboro, where he served as an elder and deacon over his 30 years as a member. Lou enjoyed bowling, hunting, and fishing. An avid golfer, Lou was a member of Tyoga Country Club, his home away from home, golfing until September of this year. Surviving besides his wife, Mary, are: three children, Louis (Debbie) Pasquale of Geneva, IL, David (Lisa) Pasquale of Germania, and Lisa McDivitt of State College; four grandchildren, Mairi (John) Thorne, Rose (Vince) Pellicore, David Pasquale, and Emma Pasquale; a great-granddaughter, Taylor Marie Pellicore; many nieces and nephews. In addition to his parents, he was predeceased by his sister, Rose Patrick. In accordance with his wishes, there will be no memorial services. Memorials may be made to Gale Hose Ambulance, Galeton, PA 16922 or the Pennsylvania SPCA (https://www.pspca.org/donate). Arrangements are under the direction of Olney-Foust Funeral Homes & Crematory, Ulysses, PA. Online condolences may be expressed at www.olneyfoust.com.

MILLPORT, Pa.—Thomas J. “Tom” Walker, 74, of Millport, passed away in his home surrounded by his loving family, on Monday, November 29, 2021.
Born on Sunday, August 31, 1947 in Wellsville, N.Y., he was a son of Holmes R. and Valma L. Hurd Walker. On December 27, 1969 in Wellsville, he married Kathie K. Cornell, who survives.
Tom was a graduate of Wellsville High School in Wellsville and attended the former Breden’s School of Welding.
In his early years, Tom was a farmer. He then was employed by West Brothers in Millport as a backhoe operator and then was employed by Butler Larkin Welding in Wellsville. He later was employed by Tru-Gas in Sheffield where he welded on pressure vessels. Lastly he was employed for 28 years at Air-Preheater (Astrom Power) in Wellsville.
Tom was a member of Crosstown Alliance Church in Shinglehouse and was a member of the Oswayo Valley Rod & Gun Club in Millport. He loved animals and through the years he and his family raised horses, dogs and rabbits. He loved to make maple syrup, cut firewood, play his guitar, and coon hunting. His greatest love was the Lord and his family.
Left to cherish his memory are his wife; three children, Shannon Thomas (Denise) Walker of Millport, Paula M. (Terry) Crain of Coudersport, and Mark M. (Christene) Gibble of Millport; five grandchildren, Samantha T. (Jacob) Jandrew, Thomas F. (Haylee) Walker, Travis C. (Brianna) Wilson, Cheyenne Wilson, and Heather M. Gibble; five great-grandchildren, Daxton Walker, Aaron Wise, Milo Wise, John Wilson, Walker Jandrew, and Darion Gibble; a sister, Jacklyn Pierce of Grand Valley; a brother, Frank Walker of Grand Valley; and several nieces and nephews.
Tom was predeceased by his parents.
Family and friends are invited to attend a memorial service at 1pm on Saturday, December 4, 2021, at Crosstown Alliance Church, Shinglehouse, with Pastor Tim Taylor, officiating.
In lieu of flowers, memorials may be made to St. Jude Children’s Research Hospital, 501 St. Jude Place, Memphis, TN 38105-9959 or to the Oswayo Valley Rod & Gun Club, PO Box 186, Shinglehouse, PA 16748.
Tom’s family has entrusted his care and cremation arrangements to Kevin J. Dusenbury, funeral director/owner of the Virgil L. Howard Funeral Home, Shinglehouse.
To express condolences or share a fond memory of Tom, please visit www.virgillhowardfuneralhome.com or the Virgil L. Howard Funeral Home Facebook page.